A Wall Street Couple Is Bringing Diversity Conversations to the Table

For Anjelica Watson ’13 and John Watson ’13, the Business School served as a place to master professional skills, expand their horizons socially and academically, and to find partnership – the married pair met in a microeconomics class in which Anjelica was John’s TA.

In their leadership roles, the Watsons sprang into action following George Floyd’s murder in May, sending an email – which was covered in Bloomberg – to all of their junior-level Black colleagues to offer support.

That email was extremely well received within the company; its positive reception shed light on the importance of bringing conversations around race, equity, and inclusion to work and to Wall Street in particular.

Below, Anjelica and John share personal experiences as Black leaders in business and offer insights on how to broach difficult conversations at work.

Many businesses are now making efforts to combat racial bias in the workplace – what are some tools organizations can implement to accomplish this more effectively?

John: From a hiring and performance evaluation perspective, it’s really important to drive conversations to be fact-based. It’s very easy to say someone is a “good guy” or they’re “a good fit,” but that’s a bit of a catch-all. While it may be true – certainly there are people who are good fits for particular cultures – if you don’t drive the conversation to be fact-based, you can unintentionally let people provide an answer that is just confirming their own bias. What we’ve tried to do at Morgan Stanley is to look at facts in an objective and unbiased way and use those facts as a basis for our discussions, whether we are hiring someone new or promoting someone who is currently employed.

Anjelica: More senior-level representation is helpful because when you have diversity of thought at that level, there’s increased accountability during hiring decisions and you can potentially prevent bias from creeping in. Senior-level involvement and dedication around hiring and diversity in general is important for an organization. There are often diversity initiatives that are not elevated to the right level of leadership within an institution to actually change behaviors or outcomes. A certain level of senior perspective, authority, and direction is required to move the organization to change.

What have your personal experiences been like as Black professionals on Wall Street?

John: I think there is an element of maturing into how complex the space can be for people of color. I don’t just mean the elements of bias, but the fact that you’re almost inevitably going to be one of the only people of color in the room. It’s even worse for my wife – if you’re a woman of color, you might be the only woman of color there at all. There’s a certain level of maturity and courage that needs to develop for people to feel comfortable in those environments. Added to that is a very high-stress workplace that exists outside of this racial framework. I think as you get older, you learn to deal with that dynamic more. And that doesn’t mean you just begin to take it, but you begin to be more comfortable speaking up and having a perspective. As a 22-year-old, it would have been very hard for me to address anything race-based. At that age, you feel lucky to be in the room at all – you might even be feeling imposter syndrome. Through your career you develop more confidence in your work, so there’s a bit of a market power dynamic to it. You earn your spot through your performance and become more comfortable addressing some of these complex issues, and you have a thicker skin.

Anjelica: Early in my career, I was very focused on making sure that I was just really good at my job. I dealt with imposter syndrome: Did I get this job because of my background? Or am I appropriately qualified to be part of this program? I was trying to eliminate that doubt. As a minority, forced maturation happens quicker than it might as a member of the majority. You find yourself having to face uncomfortable situations or even be elevated to provide your perspective on an event or a hiring decision that you may not have been expected to provide otherwise, just because you were the only minority member in the room. Because of that, if you stick around long enough, you grow into that skill. You’re forced to articulate difficult topics early in your career. And I think that really benefits you in the long run. We’re now at a place in our organization where, when it comes to difficult questions around diversity or bias, it isn’t the first time I’ve been asked the question and I have actual facts that I can articulate and translate into actionable ideas. 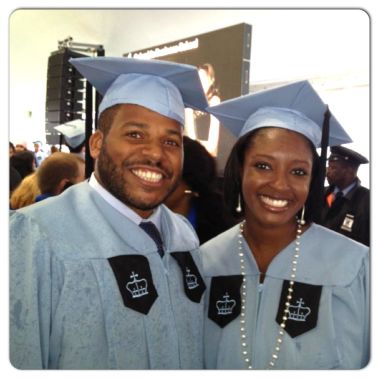 Tell me more about the email you sent to your junior-level Black colleagues at Morgan Stanley in the wake of George Floyd’s murder.

Anjelica: The initial response was very positive. I feel like there was a week this summer during which there were especially high levels of pressure around the topic. It’s not a secret that a large portion of diverse talent at these institutions is junior-level talent. As I mentioned earlier, it’s this forced maturation that minority employees have to have in terms of these difficult conversations, and it’s hard sometimes. Being in a pandemic, potentially being alone in your New York City apartment—those are added levels of stress. That email was targeted at a specific audience, and both me and John had been in their shoes before. We just wanted to offer tips on how to answer difficult questions or even just ask how they are doing. Just the sheer number of people that were on that email showed that this community did exist. I think it started smaller conversations in different pockets across the firm and provided support that we could all lean on when we were going through something that was unique to our community.

John: No one will look back on 2020 and say it was a good year. The human effects of the pandemic and quarantining have been hard for everyone. I think when you layer onto that some of the cultural complexities of being at a big financial institution in regards to race relations for junior employees, it’s very tough. They are dealing with anxieties around race that they’ve probably been dealing with their whole lives, but it’s compounded during this very intense national period. Or when you’re locked up in your parents’ house or your one-bedroom apartment and haven’t seen your friends or are worried about keeping your job.

Many feel unsure – particularly at work – of how to discuss difficult subjects such as racism. How can individuals better broach this conversation to colleagues?

John: It really comes down to courage on both sides. There are tools that have always been a part of the way businesses work – people are encouraged to raise ideas that are controversial or unpopular to come up with creative, new ideas for our clients. So we can already have these vigorous, thoughtful, respectful types of conversations. I don’t see a huge difference between those types of conversations about business and those about the climate we are living in. We would never shy away from discussing the pandemic, and every element of the business that’s been impacted by it.

Anjelica: Our experience has been generally positive around people’s willingness to have these conversations. I think as a leader, it’s about focusing on what you can control, whether that’s in the four walls of big businesses or within a smaller group. Be open to ideas and think about what can be improved or enhanced to ensure a better feeling of inclusion and belonging.

John: That’s a really good point. Approaching this with a fact-based approach is important. Letting how you’re feeling get the best of you might be cathartic, it’s probably not the most constructive way to have these conversations, especially in the context of achieving a business outcome. It’s about addressing the objectives of the business that you’re a part of. Diversity of thought is a universal objective at larger, national institutions. So, how do you teach diversity of thought? What can you do differently to achieve it? What is stopping you from getting there?